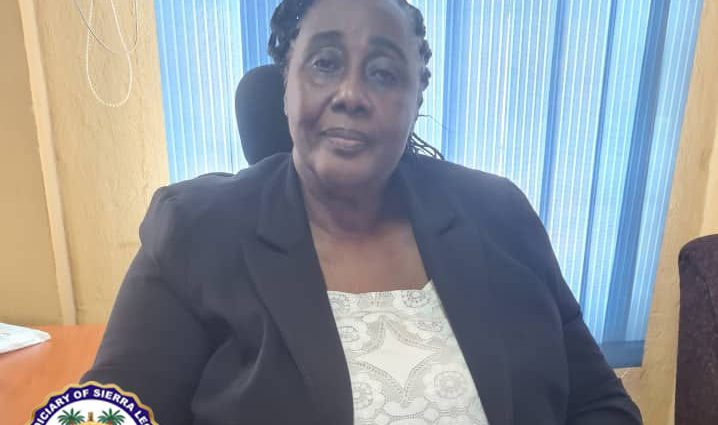 Judiciary of Sierra Leone Communications, Main Law Courts Building, Freetown, 7th April 2022: The Auditor General, Madam Lara Taylor-Pearce and her Deputy Tamba Momoh have both admitted that they understand the object of the Gazette for which the tribunal was set up by His Excellency President Dr. Julius Maada Bio to inquire into a case for stated misconduct against them.
Representing the State, Lawyer Thomas A. Freeman asked for 3 weeks to file and serve relevant papers on the Defence, adding that the Secretariat has not been properly set up.
In her response, the Chairman of the Tribunal, Hon. Justice Nyawo Matturi-Jones said, “this  is a season of adaptation.”She alluded to section 137 of the Constitution which is specifically provided to protect Judges’ tenure of office, noting that the Constitution has provided in Section 119 (9) that the Auditor General be accorded the same protection of tenure of office for Judges.
She stressed that even though the Secretariat is yet to be properly set up in their new location, the public is assured that on the next adjourned date, they will avail the State and Defence team with a Practice Direction to guide the entire process.
Justice Matturi-Jones implored all concerned persons to be patient with the Preliminary proceedings.
On his part, Court of Appeal Judge, Hon. Justice Ivan Sesay explained the purpose of the Tribunal as read to the suspended Auditor General and the Deputy Auditor General. He further inquired whether they both understood the purpose of the Tribunal which they confirmed.
Defence lawyer, Pa Momoh representing the Deputy Auditor General-Tamba Momoh, said his client will be absent on the next adjourn date set for the issuance of Practice Direction. He said he will be in Court to receive Practice Direction on behalf of his client.
The Bench granted Lawyer Fofana’s request.
One of the Tribunal members, Lawyer Lahai Farma said the Tribunal has inherent power to give out Direction during proceedings of this investigation in addition to Practice Direction.
The Auditor and Deputy were adequately represented by their lawyers.
The matter comes up on Thursday 21st April 2022 at 10:00 am
For more information, contact us on www.judiciary.gov.sl or on +23234617548 +23276321184 and +23279101086