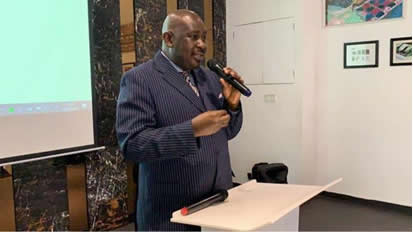 This is the first time since his appointment to attend the Sierra Leone Bar Annual General conference and to make a statement.

Last year, the Chief Justice was unavoidably absent because he had to participate together with other Chief Justices in the Arusha-Hague Conference of Chief Justices held from the 2nd -12th July 2019.

Highlighting his impressive achievements, he said, “Since I took up office I do recall that one of my first changes was to use Constitutional Instrument No. 4 of 2019 to divide the High Court into eight Divisions. Hitherto, there were only five Divisions and while these five divisions existed, they were only in name with no Special Assignment of Judges to those divisions. However, pursuant to the High Court Divisions Order, C.I. No. 4 of 2019, three completely New Divisions were created with the Property Division and the Admiralty and Commercial Division transformed to a Lands, Property & Environment Division and the Fast Track Commercial Court Division respectively. The three completely new Divisions were: Industrial & Social Security Division; The Anti-Corruption Division; and The Sexual Offences Division.”

He explained that on the 9th of December, 2019 the Social Security Courts were established and so too the Anti-Corruption Courts while on the 24th July 2020, the Sexual Offences Model Court was established. He went further to say that one of the uniqueness of the aforesaid Courts is that they have independent registries to have an efficient and effective administration.

With the ACC Court, he said more cases are now being completed within a short time than we ever had before; while with the Sexual Offences Court there is a marked improvement in the speed with which such matters are handled.

Apart from the Master and Registrar and Deputy Masters who were graduates, the Chief Justice said, “we had only one graduate in the entire administration.” He added that the workload was concentrated in the hands of the then Master & Registrar who had some accounting deficiencies and lacked the capacity for a Vote Controller and had to combine Court operations with Judicial Professional Support.

According to the Hon. Chief Justice, there was no Registrar at the Supreme Court; No Registrar Court of Appeal; No Court Operations Manager; No Human Resource Manager; No Procurement & Logistics Manager and No Chartered Certified Accountant, all of which made administering the Judiciary very daunting.

Today, he continued, “my administration had to separate Court Operations from judicial Professional Support and appoint key officers most of whom had not only graduate but post graduate qualifications. Among the positions he catalogued were Court Operations Manager; Human Resource Manager; Procurement & Logistics Manager; Registrar- Supreme Court; Master & Registrar; Registrar Court of Appeal and a Certified Accountant was seconded to the Judiciary from the Government of Sierra Leone.

Outlining the importance of the Criminal Sessions, he said they are being held in areas where there are no sitting Judges and until 2019, since 1965 were held only in Port Loko, Sefadu and Moyamba.

“Under my leadership such Sessions have been more frequent than over the years,” he said and continued that, “Sefadu – Kono is now a Resident area where the Courts sit as the same times as in Freetown, Bo, Makeni and Kenema.”

Speaking on the theme: “The Tax Regime and Legal Practice in Sierra Leone,” Justice Edwards said the topic was apt and therefore encouraged them to be tax compliant as taxation is a compulsory financial charge or some other type of levy imposed on a tax-payer, an individual or legal entity by Government in order to fund government spending and various public expenditures.

He thanked and appreciated the Justices of the Supreme Court and other Court of Judicature for gracing the occasion. He also called on his colleagues to come together to strengthen their bond for the growth of the association.

The ceremony was graced by cross-section of the Justices of the Supreme Court, the former President of the Sierra Leone Bar Association-Elvis Kargbo Esq, the Director of Public

Prosecution (DPP) Easmon Ngakui Esq and the Commissioner General of the National Revenue Authority-Dr. Samuel Jibao among host of other dignitaries.