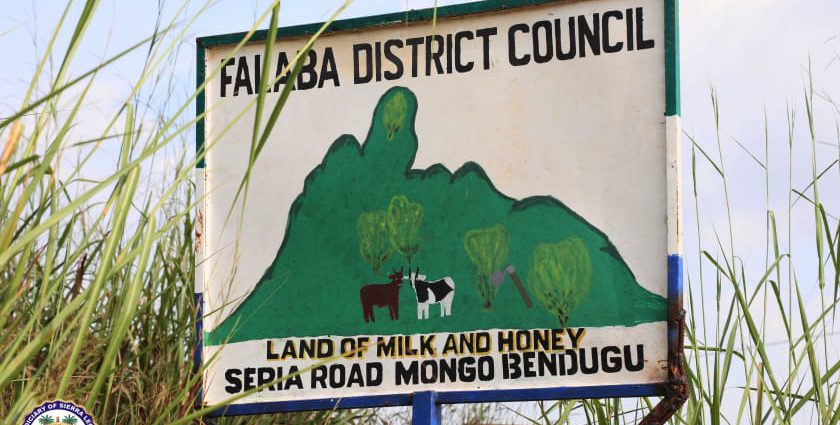 The High Court Criminal Session has commenced on Tuesday 9th March, 2021 in Mongo Bendugu, Mongo Chiefdom, Falaba District with seven cases ranging from Sexual Penetration of a child, Rape, Larceny among other offences contrary to law.
The first Resident Judge of Kabala, Koinadugu District, Justice Abdul Rahman Mansaray (J) is presiding over the cases.
During the official opening of the Special High Court Criminal Session at the Masabalia Court Barry in Mongo Bendugu, the Regent Chief Sheku K. Jawara, said the day shouldn’t only be celebrated but should be written in the “Falaba History Book” that it was during his tenure that the first High Court sitting commenced.
“I welcome this development on behalf of my people in the Falaba District,” said the Regent Chief, whilst commending the Chief Justice, His Lordship Justice Desmond Babatunde Edwards for the massive reforms at the Judiciary. He also saluted His Excellency President Julius Maada Bio for supporting the decentralisation of the justice system.
According to him, democracy can never be sustainable without a fair, effective and efficient administration of justice, and therefore used the occasion to appeal for a Resident Magistrate in Mongo Bendugu town.
Justice Abdul Rahman Mansaray told the thirteen Section Chiefs and other stakeholders who graced the opening ceremony that they should be grateful to the current leadership for according them such an opportunity to bring a High Court Judge to preside on cases to enhance expeditious trials.
He called on them to support the Judiciary and assured of the construction of a Court in the District headquarter town.
Justice A.R Mansaray (J) reiterated that the High Court sitting is geared towards sustainable peace in the District rather than just keeping people behind bars.
The High Court Criminal Session commenced with seven cases. The accused were all represented by Lawyer I. Samba from the Legal Aid Board. The cases were prosecuted by the State Counsel resident in Kabala, AY Mansaray.
Two of the accused were imprisoned by Justice A.R Mansaray. Accused Momodu Samura, was sentenced to three years for Larceny contrary to Section 13 (a) of the Larceny Act of 1916 and accused Sheku Mansaray, was sentenced to two years for assault occasioning to bodily harm contrary to Section 47 of the Offences Against the Person Act of 1861.
The Judiciary team comprised the Head of Communications, Elkass Sannoh; Registrar of North-West Region-Mohamed Bangura; Registrar of the High Court in Kabala-Andrew Sesay and the High Court Baliff in the North-Issa Jomboi.